Details on the Unlocking of the San Bernardino Terrorist’s iPhone by Bruce Schneier
Monday April 19th, 2021 at 11:03 PM

The Washington Post has published a long story on the unlocking of the San Bernardino Terrorist’s iPhone 5C in 2016. We all thought it was an Israeli company called Cellebrite. It was actually an Australian company called Azimuth Security.

Azimuth specialized in finding significant vulnerabilities. Dowd, a former IBM X-Force researcher whom one peer called “the Mozart of exploit design,” had found one in open-source code from Mozilla that Apple used to permit accessories to be plugged into an iPhone’s lightning port, according to the person.

Using the flaw Dowd found, Wang, based in Portland, Ore., created an exploit that enabled initial access to the phone ­ a foot in the door. Then he hitched it to another exploit that permitted greater maneuverability, according to the people. And then he linked that to a final exploit that another Azimuth researcher had already created for iPhones, giving him full control over the phone’s core processor ­ the brains of the device. From there, he wrote software that rapidly tried all combinations of the passcode, bypassing other features, such as the one that erased data after 10 incorrect tries.

Apple is suing various companies over this sort of thing. The article goes into the details.

Most supporters of these decisions could care less what came between the caption and "It is so ordered." The reasoning was irrelevant. Every year when I teach these, students are shocked at how thinly reasoned Brown is. They are surprised that Roe actually reads like a piece of legislation. And they struggle to identify the precise holding of Obergefell.

Justice Scalia speaks for me, at least:

If, even as the price to be paid for a fifth vote, I ever joined an opinion for the Court that began: "The Constitution promises liberty to all within its reach, a liberty that includes certain specific rights that allow persons, within a lawful realm, to define and express their identity," I would hide my head in a bag. The Supreme Court of the United States has descended from the disciplined legal reasoning of John Marshall and Joseph Story to the mystical aphorisms of the fortune cookie.

It is not surprising that law professors feel compelled to "rewrite" these decisions. I admire Jack's project. He and his colleagues are trying to bolster the work of Justices who could not, or perhaps would not, write strongly reasoned legal decisions. Every franchise needs a reboot. Maybe Christopher Nolan can take a look at the Eleventh Amendment.

Over Half of the Federal Government’s Spending Data Is Wrong by Elizabeth Harrington
Tuesday July 24th, 2018 at 12:16 PM

A new bipartisan Senate report revealed more than half of the government's public data on federal spending is wrong, as the website USAspending.gov is riddled with errors.

The subcommittee reviewed over two dozen inspector general reports and determined 55 percent of the spending data submitted to USAspending.gov was inaccurate. The errors accounted for $240 billion in spending during the second quarter of 2017, according to the report.

The Digital Accountability and Transparency Act of 2014, or DATA Act, required federal spending to be easily accessible to the public through a searchable website, which became USAspending.gov. The website was revamped earlier this year, but agencies are not meeting their requirements to submit accurate, consistent, and reliable data on its spending.

The agency in charge of USAspending.gov—the Treasury Department—is among the worst culprits, as 96 percent of its own data is inaccurate.

"The most troubling aspect of the Treasury Department's difficulties in submitting accurate data to USAspending.gov is that it is the very agency that created the DATA Act standards for [the] rest of the federal government," the report said.

One hundred percent of the Defense and Energy departments' spending was either incorrectly reported or not reported at all.

The Pentagon's inspector general warned, "Policymakers may not be able to rely on the DoD's financial and award data to make decisions and effectively plan for mission critical programs and operations."

"The goal of the DATA Act was to empower the American public and policymakers with timely and accurate information on how taxpayer money is spent in order to improve transparency and help identify and eliminate government waste," said Sen. Portman. "It is troubling that most federal agencies failed to comply with this law, and more than half of all the spending data federal agencies submitted was inaccurate."

"Going forward, this report underscores the importance of requiring federal agencies submit timely and reliable spending data so that the public and policymakers have a clear understanding of how taxpayer dollars are spent," Portman added.

The report noted a number of reasons for the complications of reporting federal spending, among them, sheer volume.

"In fiscal year 2017, for example, the government spent $3.98 trillion across the 96 agencies that comprise the executive branch," the report said.

The reports cited examples of inaccurate information on USAspending.gov. For instance, search results for the same programs can come up with different spending totals.

"Search results on USAspending.gov can be different depending on how a user initiates a search on the site," the report explained. "For example, there are two different results when a user searches for spending of the Department of Labor's Unemployment Insurance program. Using the Spending Explorer, a user sees the FY2017 expenditures for the program at $29,589,861,672."

However, when a user searches for unemployment insurance spending through the "Award Search" on USAspending.gov, the results are $26 billion less.

Nearly every department and agency had high error rates. The State Department reported an 83.6 percent accuracy error rate, accounting for over $3 billion worth of spending.

The Department of Housing and Urban Development failed to report $17.9 billion, and $37.8 billion of the U.S. Department of Agriculture's spending data was inaccurate—an error rate of 97.1 percent.

"USAspending.gov, however, only published awards totaling $160 million, less than 1 percent of the program's spending for 2017," the report said.

The only agencies to report zero percent error rates were the Department of Health and Human Services and the Environmental Protection Agency. The subcommittee, however, found inconsistencies on USAspending.gov, such as a $64 million discrepancy in the EPA's Drinking Water State Revolving Fund depending on how a user searched.

The post Over Half of the Federal Government’s Spending Data Is Wrong appeared first on Washington Free Beacon. 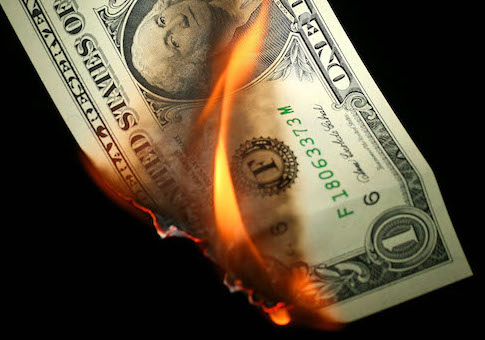 My analysis of EPA Administrator Scott Pruitt’s recent statements on climate change, and the response to his statements.

Last week, there was a controversial interview of Scott Pruitt on CNBC. A sampling of the headlines reporting on his interview:

CNBC:  Scott Pruitt’s climate denial is dangerous and out of step.

David Robert at Vox: Scott Pruitt denies basic climate science. But most of the outrage is missing the point. Subtitle:  It’s not about Pruitt and it’s not about facts. Excerpt: The right’s refusal to accept the authority of climate science is of a piece with its rejection of mainstream media, academia, and government, the shared institutions and norms that bind us together and contain our political disputes.

A number of scientists have responded in various venues regarding their opinion on Scott Pruitt’s statements.  Here I include the ‘official’ statement from the AGU:

AGU Responds to Statements from EPA Administrator Scott Pruitt on Climate Change.  Excerpt: The position statement of the American Geophysical Union regarding climate change leaves no doubt that increasing atmospheric concentrations of carbon dioxide resulting from human activity is the dominant source of climate change during the last several decades.

Listen to what Scott Pruitt actually said on CNBC and then compare it to the portrayal in the media.  Here is the key text:

I think that measuring with precision human activity on the climate is something very challenging to do and there’s tremendous disagreement about the degree of impact, so no, I would not agree that it’s a primary contributor to the global warming that we see.  But we don’t know that yet.  We need to continue the debate and continue the review and the analysis.

Can you square what Pruitt actually said with the distorted quotes and headlines about this?  I can’t.

I think that these two statements made by Pruitt are absolutely correct:

The other two statements give slightly conflicting messages:

I would not agree that it’s a primary contributor to the global warming that we see.  But we don’t know that yet.

The main statement of controversy is:

I would not agree that it’s a primary contributor to the global warming that we see.

You can interpret this in two ways:

1.Pruitt is denying that CO2 is a primary contributor to recent global warming

2.Pruitt is saying that he does not accept as a ‘fact’ that CO2 is a primary contributor because we simply don’t know.

Since his subsequent statement is “But we don’t know that yet”, #2 is obviously the correct interpretation.

If I am interpreting Pruitt’s statements correctly, I do not find anything to disagree with in what he said: we don’t know how much of recent warming can be attributed to humans. In my opinion, this is correct and is a healthy position for both the science and policy debates.

Exactly what the Trump administration intends to do regarding funding climate science, energy policy and the Paris climate agreement presumably remain as subjects of debate within the administration.  Looking at every little leak and quote out of context as a rationale for hysteria simply isn’t rational or useful.

The most interest reaction to all this is David Robert’s vox article:

The right’s refusal to accept the authority of climate science is of a piece with its rejection of mainstream media, academia, and government, the shared institutions and norms that bind us together and contain our political disputes.

The ‘problem’:  a change of administration and party after 8 years, mainstream media no longer has a lock on the media’s message (given all of the new news sources on the internet), academia’s profoundly liberal bias is being challenged, and the consensus that has been negotiated and enforced by certain elite scientists is being challenged.

Three cheers for democracy, the internet and the scientific process.